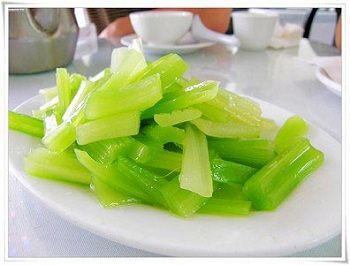 Celery is from the same family with parsley and fennel, the Umbelliferae family. It is a popular vegetable found in a variety of cuisines from around the world. For culinary use, it is most commonly found in soups and salads, or as a garnish to certain dishes. Also, it is commonly eaten as a snack, since it is quite filling, but not fattening. Celery is often called a “negative calorie food” but it certainly isn’t lacking in nutrition. This article provides an insight into the health benefits of celery.

According to the researchers from Harvard Medical School and Harvard School of Public Health, celery contains at least eight anti-cancer compounds that help prevent cancer from spreading. Celery contains phthalides, flavonoids, and polyacetylenes. These cancer-fighting components detoxify carcinogens. Celery also contains coumarins that enhance the activity of certain white blood cells, which can effectively stave off cancer as well.

Drinking celery juice every day for a week significantly helps lower blood pressure. Celery contains compounds called phthalides, which have been shown to lower blood pressure by relaxing the muscles around the arteries and allowing vessels to dilate. According to a study conducted on laboratory animals, animals’ blood pressure dropped by 12%- 14% when they were injected with phthalides.

Celery will not directly cause you to lose weight, but it is a great aid in weight loss because it is very low in calories and has a lot of filling fiber. 1 cup or 100 gms of celery has only 14 calories, it is purported to be a negative calorie food, which means it takes the body more calories to digest it than the food itself contains. A tablespoonful of honey in celery juice, sipped slowly, will very effectively reduce the appetite if taken before a meal, and makes a delightful drink. It will also help in reducing their weight.

There are many interesting anecdotes from history which testify to the significance that celery has always enjoyed as an aphrodisiac. According to some studies, the chemical compounds in celery affect the pituitary gland which is the primary gland regulating the levels and actions of sex hormones in the body. Celery boosts sexuality without triggering uncontrollable urges.

Act as a Diuretic

Celery is rich in both sodium and potassium, they regulate body fluids and stimulate urine production by removing excess fluids that accumulates in the body.  Because of its diuretic properties — also thanks to the L-3-N-Butylphthalide compound — celery has long been used as a traditional medicine in places like Trinidad and Tobago to treat UTIs. Celery helps you expel water from your body without also losing a lot of potassium.

The polyacetylene in celery is an amazing relief for all inflammation like rheumatoid arthritis, osteoarthritis, gout, asthma and bronchitis.  Celery also contains luteolin, which is a powerful phytonutrient that interferes with brain inflammation and inhibits the production TNF-alpha, which directly causes inflammation.